I'm giving Inkpad a bit of a rest (we haven't seen an update in a long while) and have been trying out other art creation apps. I have really taken a liking to Procreate. I downloaded it when it was on sale for 99 cents and have been very impressed with the simplicity of the user interface, the speed it performs at on my original iPad, and mostly, it's fantastic brush engine.

I admit to having a fascination for nature in my art and have always appreciated well crafted wildlife art paintings. Being a Canadian, the art of Robert Bateman springs to mind immediately, however, one of my favourite wildlife artists and influences in my artwork is Terry Isaac. See some of his work here. In particular, I love how he composes his paintings and sprinkles them with magical moments of nature - most particularly light. After seeing a digital painting by JamesCuda on Flickr I was inspired to try a wildlife painting on the iPad using Procreate.

The picture in my mind's eye that I wanted to paint was one of a Grizzly catching a salmon.
I started off with a rough sketch of what I envisioned... a Grizzly standing in a river at the edge of a waterfall, salmon in mid air. The scene lit up from behind so as to light up the bear's fur. 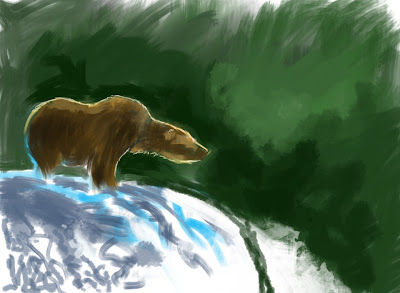 There are plenty of wildlife reference photos on the internet, however, be careful not to directly copy any portion of a photo or artwork as it belongs to it's creator. I had no direct photo of my own to work from so I imagined the composition myself. After some further work on the piece I realized I was not entirely happy with the composition. The bear standing in profile made the painting look too flat. 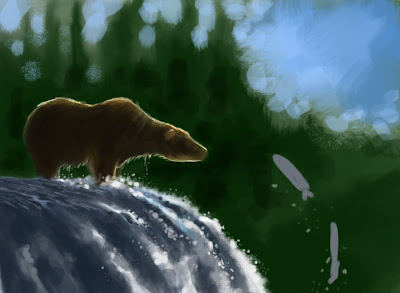 I decided to crop in on the bear and reduce the number of salmon to one making it look more like a one-on-one encounter between the two creatures. Once happy with the basic composition, I began to add detail. 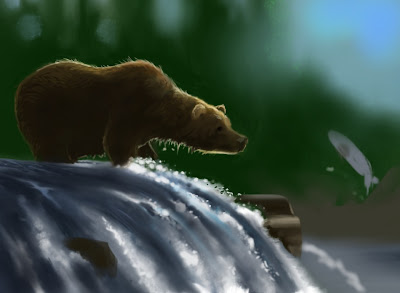 After playing with the background colours and detail, I settled on a completely out of focus background to help draw the eye on the main elements in the painting.
Here is the final piece. See the larger version on Flickr. 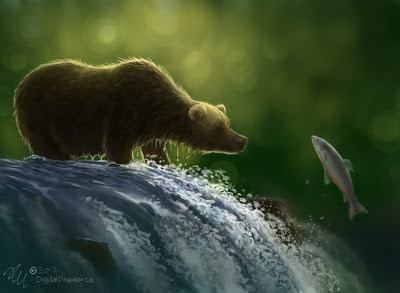