Autumn is here (in North America at least) and nothing symbolizes harvest time quite like a pumpkin. So, to get you in a gourd mood, here's how you can draw a nifty vector-based pumpkin on an iPad using Inkpad: 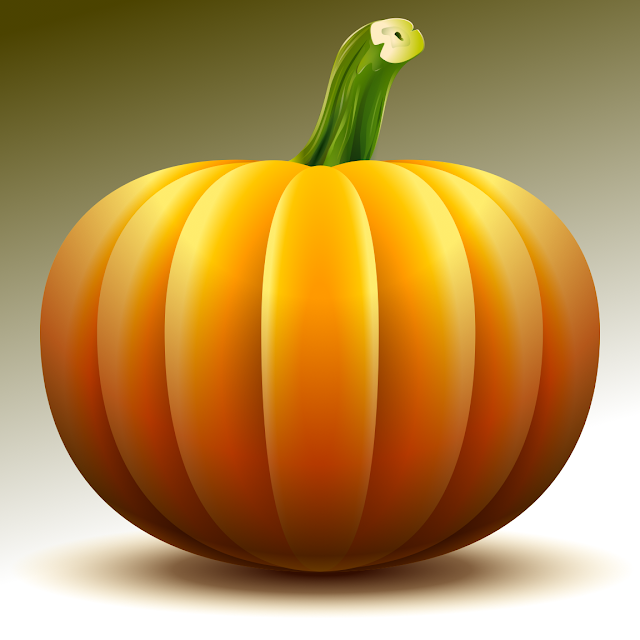 Document Setup
Open Inkpad and create a new drawing using the following settings:
Snap to points: On
Snap to Grid: On
Grid: On
Grid Spacing: .5 in
Size and Units: 8 in x 8 in 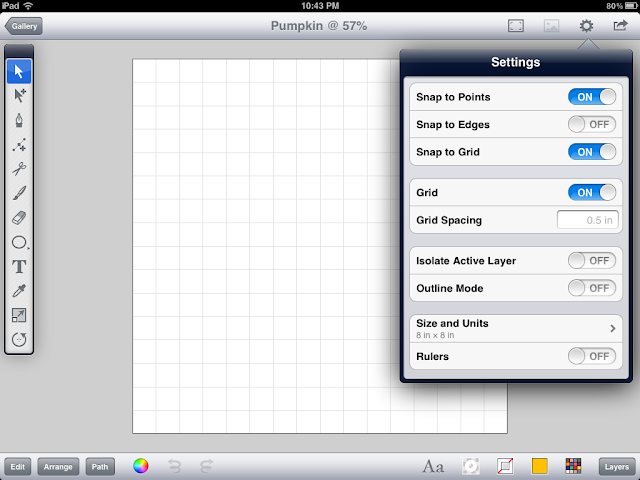 Basic Shape
Using the circle Tool, create a circle similar to the one illustrated below. 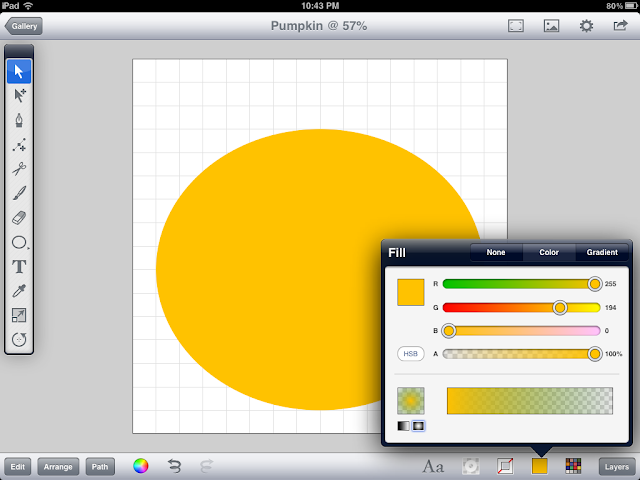 Next, with the Arrow Tool, tap on the top anchor point to select it. Begin to move the left handle upwards, while doing so place a second finger on the screen. This will "break" the handles at the control point and will allow you to control them individually. Set the handles similar to picture below. 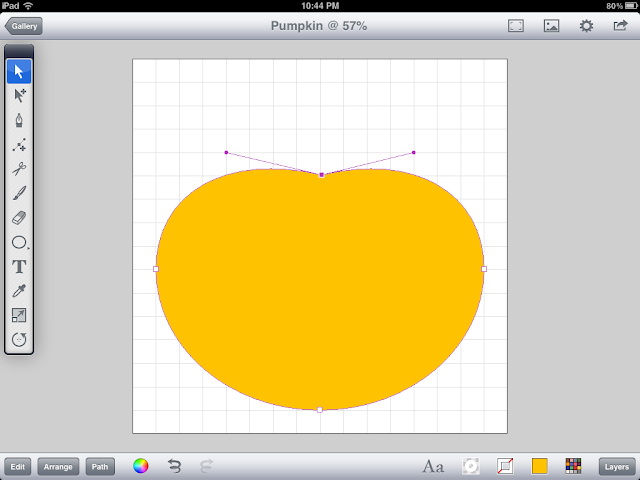 Adjust the bottom anchor point similar to pic below. We have now drawn the basic pumpkin shape. 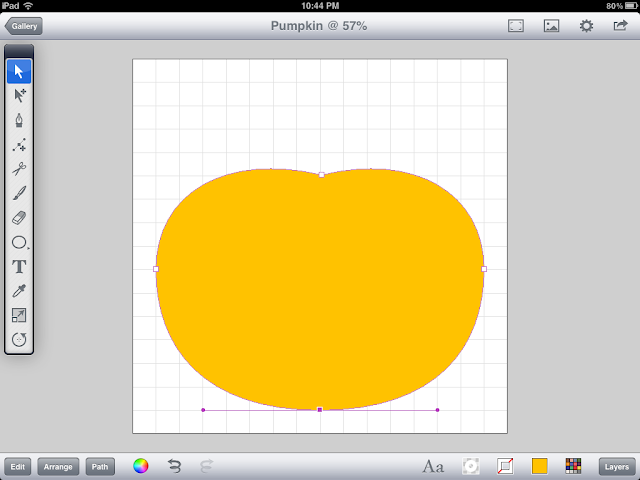 Stacking Shapes
Let's establish the basic pumpkin colors. First, fill the pumpkin outline with a radial gradient. Take note of the positioning of the gradient indicator.
Create 4 gradient stops and position them to the right in a similar fashion to the depiction. Exact positioning isn't important at this point as we will be tweaking later.

The colors I used (from left to right) are as follows: 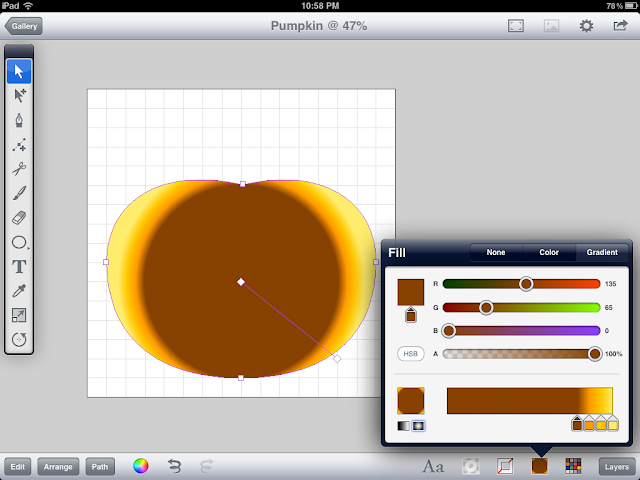 Duplicate the pumpkin shape in place by using the "Edit > Duplicate in Place" command.
Select the Scale tool. Begin to scale the copied pumpkin shape. Similar to breaking the handles on an anchor point, place a second finger down during the scaling process. This activates the non-uniform scale mode and will allow you to squash the pumpkin similar to the pic below. This is a little tricky and may take a few tries and practice to get the hand of it. If you are having difficulty scaling the shape the way you want, try turning off the snap settings. 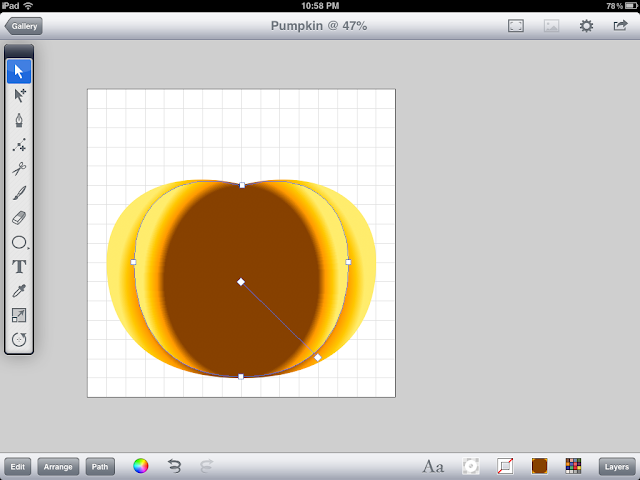 Repeat the previous copy, paste, and scale actions to create another layer of pumpkin. 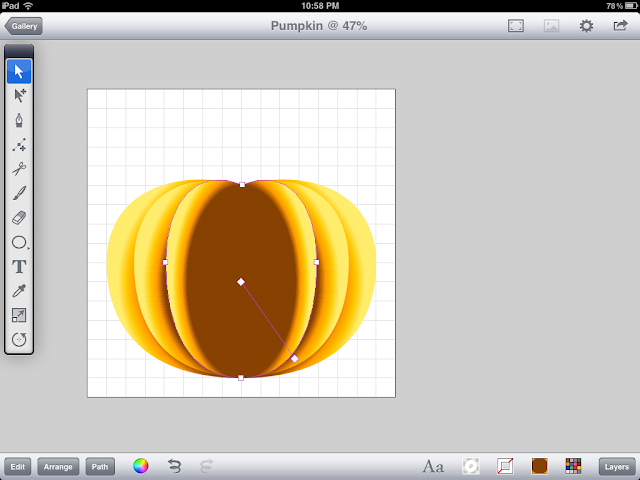 Repeat again... And your pumpkin should now look like this. 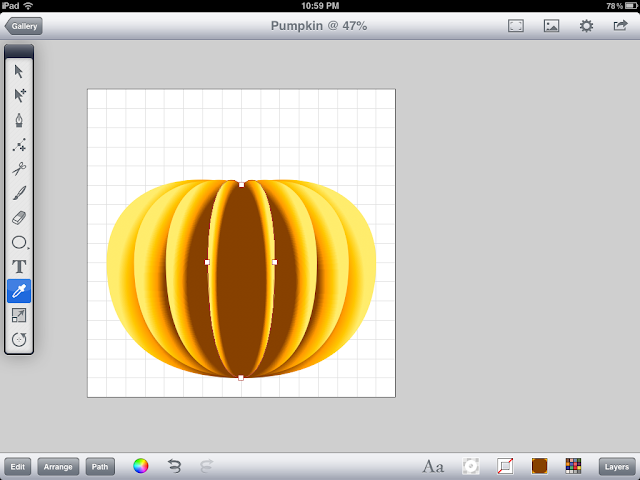 Next, remove the darkest color from the gradient of the front pumpkin shape.
Select each of the shapes and adjust the position of the darkest gradient stop so that it blends in with the shape in front of it. 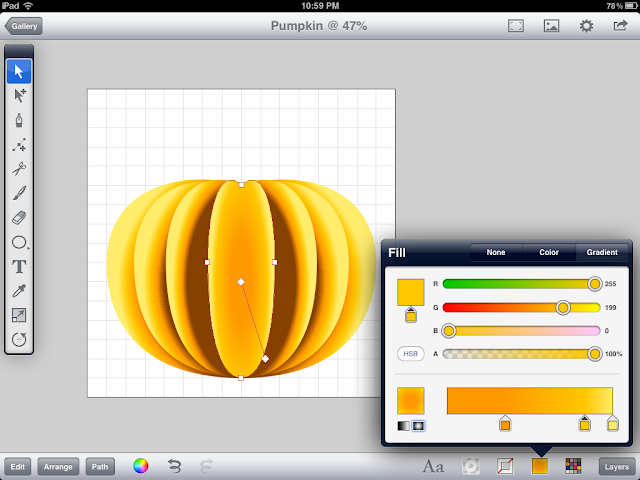 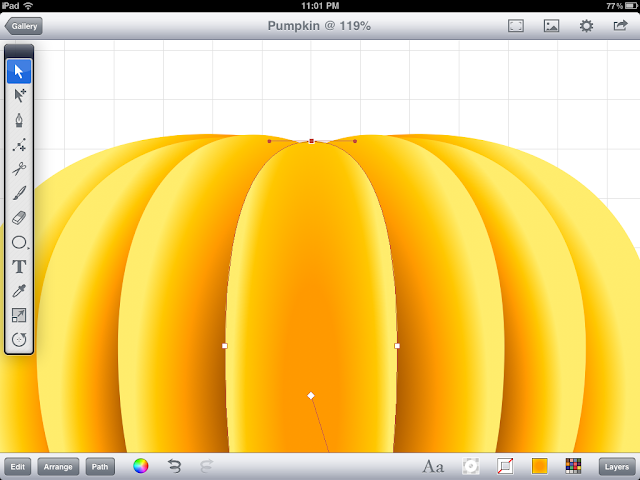 Adding Detail
Create a new layer below the pumpkin shapes for the stem. With the Brush Tool selected, draw a stem shape. 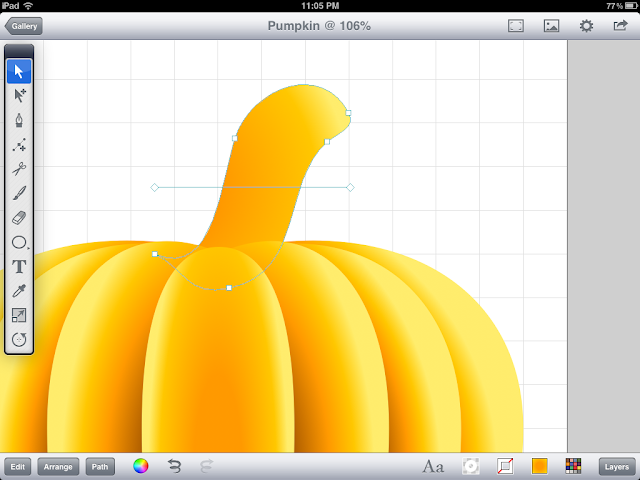 Use a radial gradient to set the colors of the stem.
To add further realism to the pumpkin we will add a shadow.
Copy the largest pumpkin shape and paste it into a new layer above all other layers.
Fill the layer with a radial gradient and set the transfer mode to multiply. 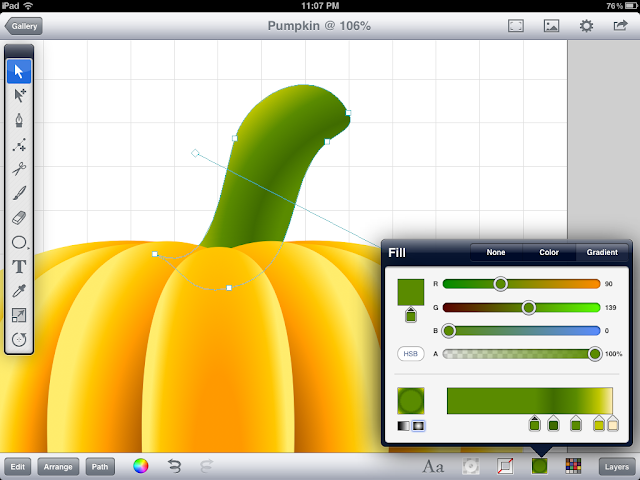 Set the gradient controls to have the smaller radius on top. Extend the control slightly beyond the top and bottom if the shape.
The colors used for the gradient stops are (left to right):
Color 1
R:255  G:255  B:255

Notice Color 2 gives the pumpkin a much richer orange hue.

Shadows
Create a new layer above the layered pumpkin artwork.
Select the back most pumpkin shape. Copy it and paste it in your new layer.
Fill it with a centered radial gradient using colors similar to the gradient pictured below. Keep the darker colour a warm color.
Change the Blend Mode to Multiply (under Shadow and Opacity menu) 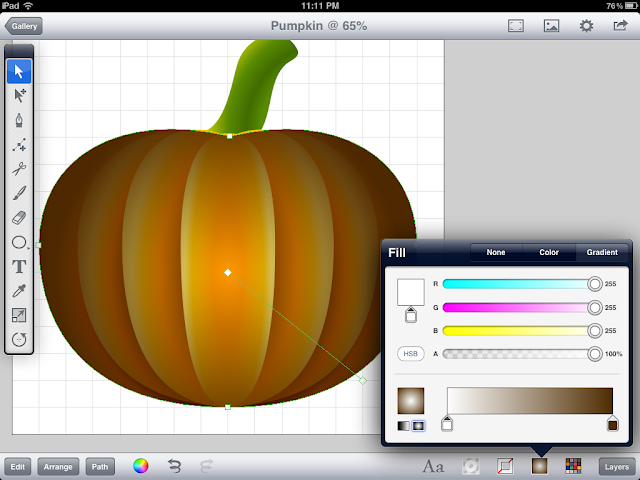 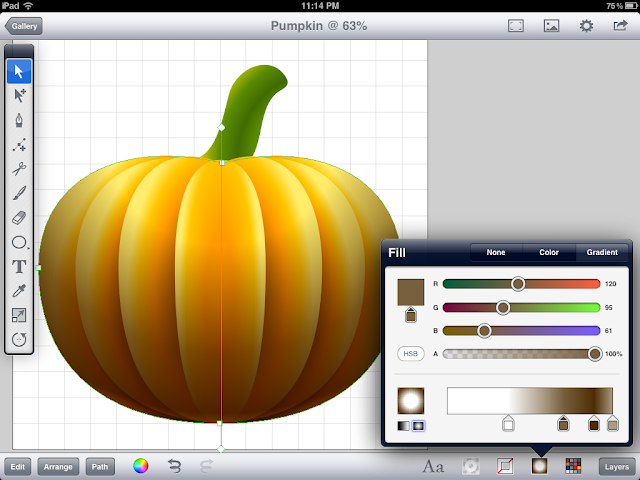 For the cast shadow create another new layer. Draw a circle and fill it with a centered radial gradient. Use the following arrangement for the gradient stops. Set the transparency of the outermost gradient to 0%. 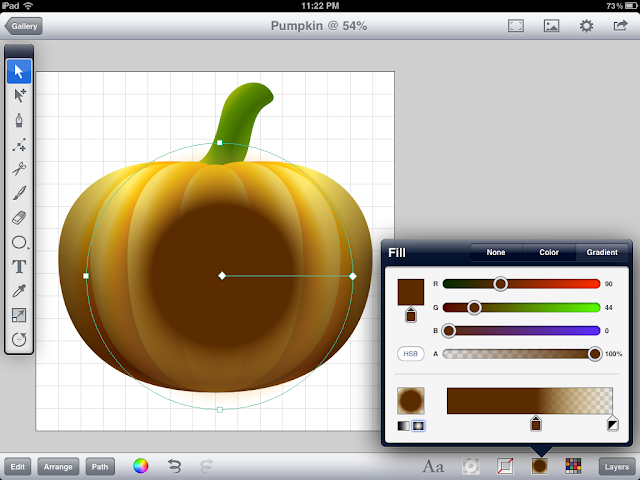 Use a non-uniform scale (two finger technique) to squash the shadow. 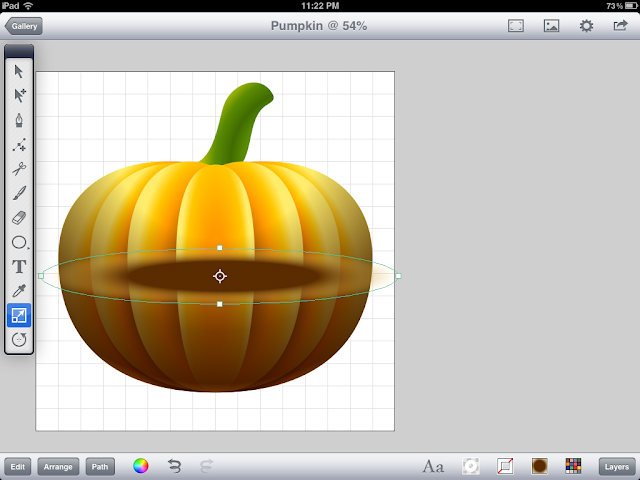 Place the shadow below the pumpkin and send the layer below all other layers. Adjust the location of the gradient stops until you are satisfied with the look if the shadow.
Add some details to the stem. A couple of subtle, well placed highlights help a lot.
One final step. Create a background layer below all other layers. Create a box and fill it with a linear gradient. 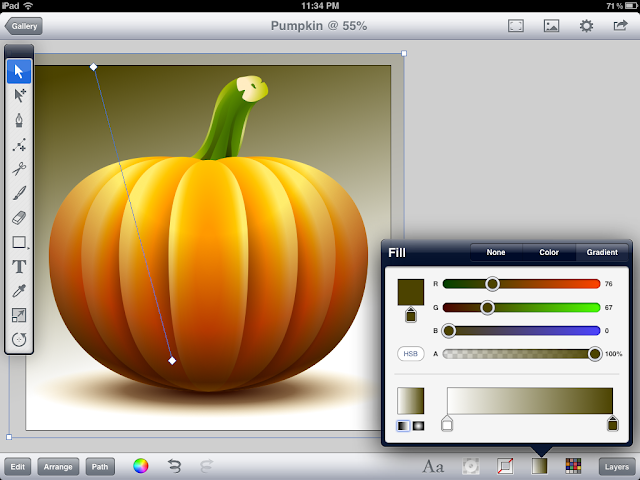 Here's a look at the creative process behind one of my recent illustrations along with a few mini-tutorials covering some of the techniques used to create this illustration. This illustration was created on an first-generation iPad using the vector illustration app – Inkpad.

My illustrations are usually created by a process of discovery, actions + reactions to the actions. They involve a series of tests, comparisons, and decisions – during which layers of artwork are often left unused at the end of the piece. Allow me to walk you through the concept, layout, and detail stages of this illustration (for more examples of Inkpad illustrations check out my Flickr photostream).

The Concept
The concept behind this illustration began as a play on words from the phrase "Carpe Diem" ("seize the day")... However, "Carpe Diem" can easily be said as "Carp per diem"(per diem being latin for "daily allowance"). Naturally, the visual of a carp getting his daily meal sprung to mind. So, after some research into what carp roughly looks like, I ventured into this illustration.

The Layout
A quick sketch was made to help establish the mood and composition of the drawing. Very basic shapes were used as the balance of the drawing was considered. Position and size are important here. The worm, being smaller and lower, is in a position of weakness. Basic color tone is also established in this stage - this scene was envisioned to be at the bottom of a warm tropical river so a warm green was selected as the overall color. 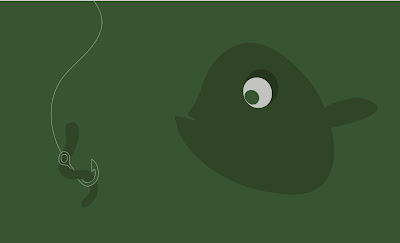 The Lighting
This style of illustration relies heavily on lighting to set mood, enhance character features, and help guide the viewer's eye throughout the illustration. All the lighting in this illustration is created by using radial gradients to create highlights and glows that give it a luminescent look. See below for a quick tutorial explaining how the radial gradients were created for this project. 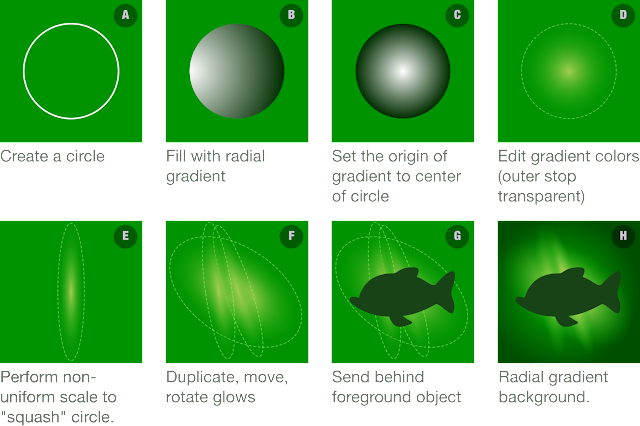 For further details on creating gradients in Inkpad check out my previous tutorials (Part 1 & Part 2).

In the image below you can see how the basic lighting began with gradients. Notice the reflected lighting off the fish's head - the upper section receives the main light source while the right perimeter and bottom of the fish use subtle gradients to illustrate "bounced" light. This helps give the fish volume and gives the illusion of a 3D shape. 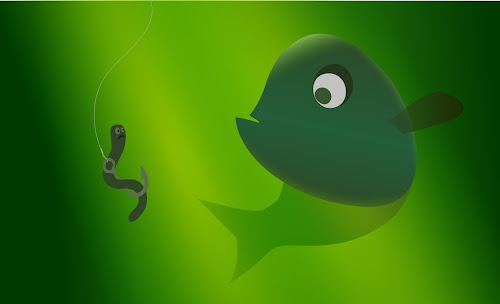 Further adjustment to the colors of the radial gradients behind the characters gives a green glow. This is achieved by setting the transparent colour in the radial gradient to a bright green (again, refer to Part 2 of my gradient tutorials for more detailed explanation on how to achieve this effect).
The Details
Adding the back half of  the fish makes the illustration more dramatic. It conveys the appearance that the fish is circling the worm and checking it out. By reducing the transparency, the tail appears to be more distant and less visible – as it would appear in murky water.

The translucent detail on fins and tail were created using a series of radial gradients. See below for the construction sequence.

The specks floating in the water are semi-transparent circles overlayed with radial gradients to give them the effect of having been hit by the light. These were added to create a sense of depth in the water. They also help emphasize the illusion of bright beams of light shining through the water illuminating particles in the murky depths. 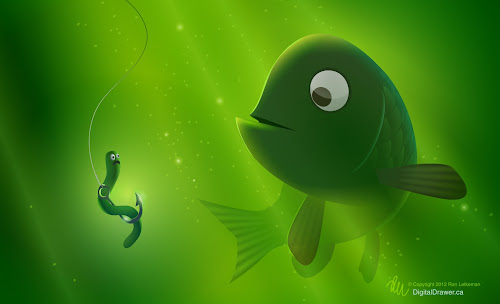 The main light source in this illustration is behind the characters. To enhance this lighting effect and further define the outline of the characters, a thin highlight line was drawn on the edges that "receive" light. See below for a close up example of this technique. These lines were created using the pen tool to carefully outline these highlights. 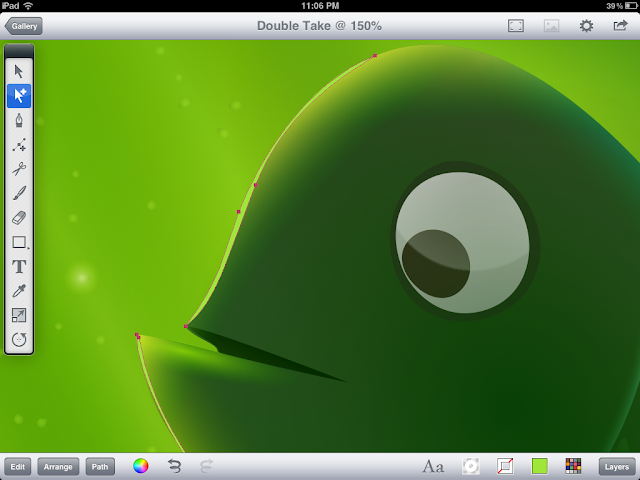 The first scale created began as a circle. It was easily modified by double-tapping the left-most anchor point (with the selection tool) to remove the bezier handles and turn it into a corner. Next the handles for both the top and bottom anchor point were rotated to give the scale it's specific shape. Once one scale was done it was relatively easy to duplicate, place and tweak the existing scales. A subtle gradient fill was used  to give the scales a sense of volume – and that they overlapped one another. 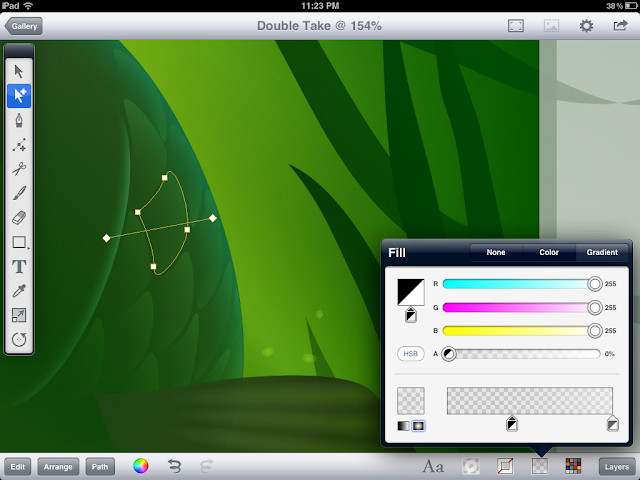 The final phase of the drawing involved the shape of the weeds that surround the fish and worm. I went through several iterations, trying out various shapes sizes and positioning before settling on a simplified, more transparent version that complemented the drawing. 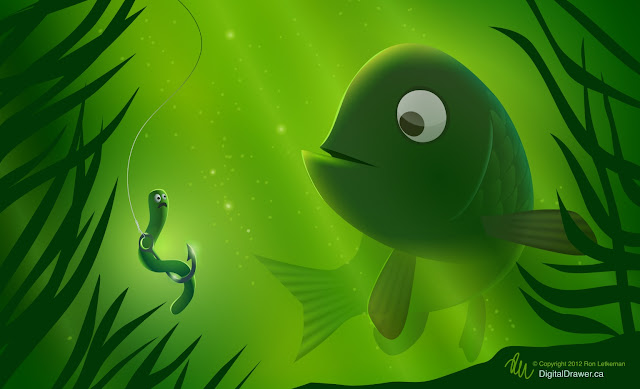 It's always interesting to take a look at the outline mode of the final illustration. In this case after all color and values are removed the basic flow of the illustration still works. It also reminds me a lot of the paint-by-numbers paintings I used to do as a kid. 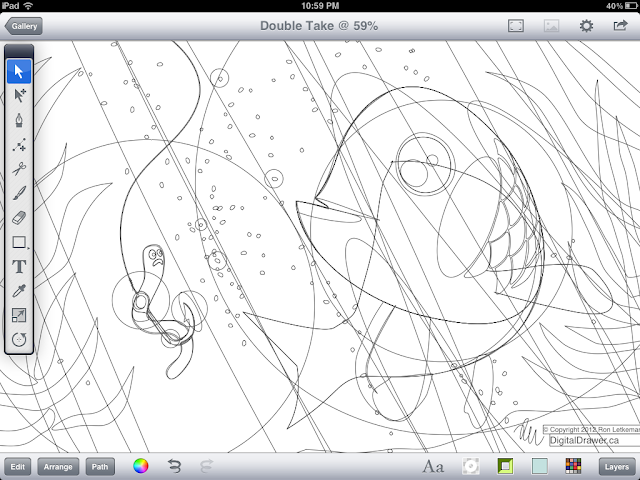 That's it for this post ... thanks for reading! As always, I look forward to feedback, comments, and questions. Let me know if you have any suggestions for Inkpad tutorials you would like me to cover.
Posted by Unknown at 09:57 1 comment: